As the temperatures grow warmer, many stargazers are ready to head outside regularly again. In the spring, the sky shows us a completely different face. But what is there to see? What is worth looking for?

Your sky calendar for the next three months: The new astronomy infographic, “Highlights of the Spring Sky,” shows you what will be happening in the sky from March through May 2019, at a glance. 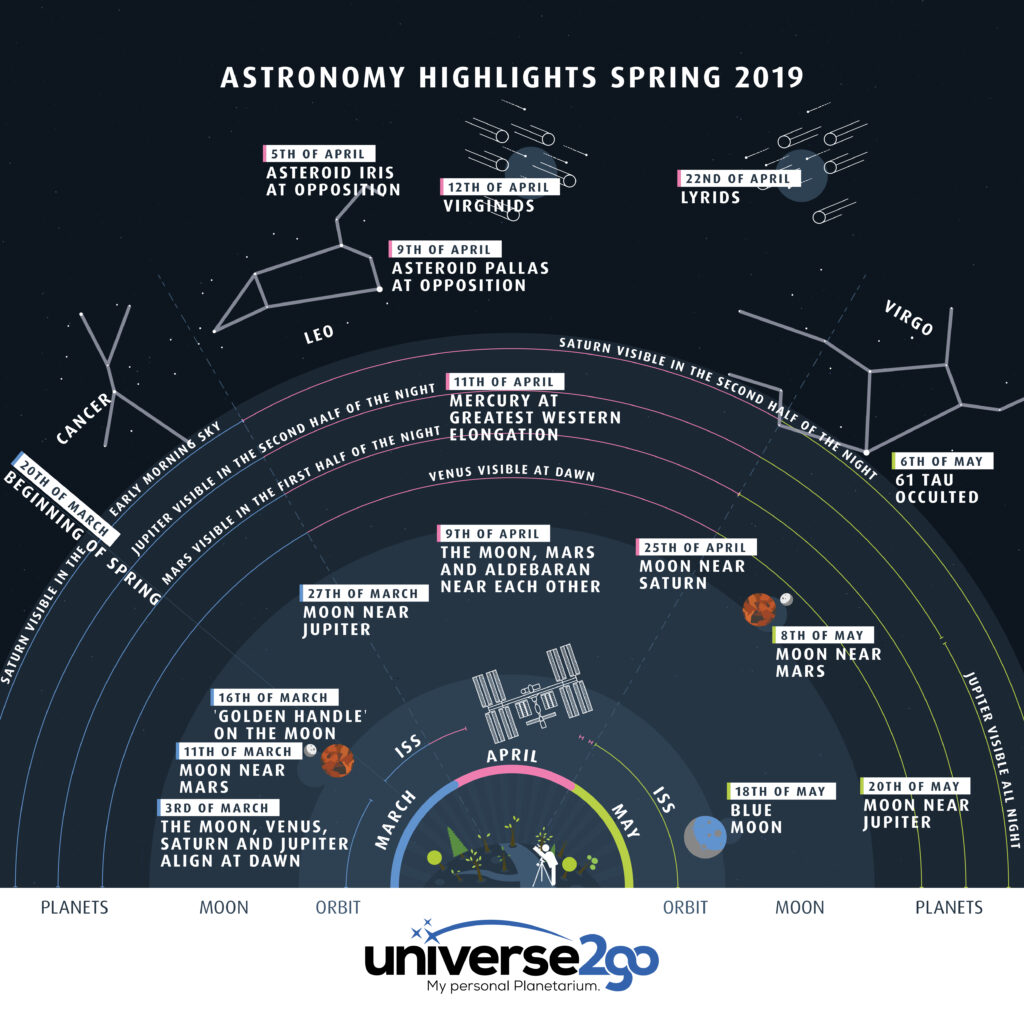 March 3: The Planet Chain – the Moon, Venus, Saturn and Jupiter at Dawn

A good reason to get up early: this morning, we can see the planets Jupiter, Saturn and Venus lined up like beads on a necklace. Starting at around 6 am, the Moon will peek up over the horizon and join the show. The constellations Scorpius and Sagittarius are the first heralds of summer, but it will be a long time before they are visible in the evening sky.

To the naked eye or with binoculars, the Moon and Mars offer a pretty sight. They are close together, only 5 degrees apart. The Moon is just 5 days old today and shaped like a crescent.

A fascinating occurrence: the “Golden Handle” on the Moon. Like a handle made of light, it breaks through the Moonlit night just past the terminator. We can see Mare Imbrium near the Sinus Iridum crater and the tall Montes Jura range. This is where the Sun rises in the twilight zone. But while the crater is still in the dark, the Sun bathes the circular mountaintops of Montes Jura in sunlight. A golden ring in the darkness.

Tonight, the Moon does not rise until after midnight. But it isn’t alone. It is accompanied by Jupiter, and they will travel together across the sky for the rest of the night. Jupiter will remain just below the Moon, about 50 arcseconds away.

Iris is one of the largest asteroids in the asteroid belt. This chunk of space rock has a diameter of 200 kilometers. On April 5 it will be in opposition to the Sun, reaching a brightness of 9.4 mag.

The asteroid Pallas comes into opposition this month, reaching a brightness of 7.9 mag. Theoretically, it can be spotted with a pair of binoculars, and definitely with a telescope. But it appears as just another tiny dot among the stars. Between April 10 and 12, Pallas will pass by the 2.6-mag η Boötis – a great orientation point, because both objects appear in the same ocular field of view.

April 9: A Meeting of the Moon, Mars and Aldebaran

This evening the narrow crescent of the Moon will appear in the Taurus constellation, along with Mars and the constellation’s bright main star, Aldebaran.

Mercury orbits the Sun so quickly and so closely that we cannot always see it. But right now, Mercury has a large angle distance from the Sun at 27°. Still, it will be almost impossible to make out around daybreak.

The Virginids are a meteor shower that come from the Virgo constellation. They show relatively little activity, with at most 5 shooting stars per hour. The best time to observe them is around midnight.

The Lyrids are a meteor shower that will produce just 10 to 20 meteors an hour at their peak on April 22. The best time to observe them is between 10 pm and 4 am; before midnight, we can enjoy the view without the disruptive Moon. The radiant, in other words the place where the shower begins, is located in the Lyra constellation.

Tonight, the Moon will pay another visit to the ringed planet. We can see this beautiful sight in the early morning hours, starting at around 3 am. Above it and to the right is the planet Jupiter, glowing with a brightness of -2.4 mag. The chain made up of these planets and the Moon offers a good opportunity to take beautiful atmospheric pictures.

The Moon’s path will lead through the Taurus constellation and the Hyades cluster, creating various interesting occultations with bright stars. This evening, the stars 61 Tau and 68 Tau will be hidden by the wafer-thin crescent Moon. One problem: the occultations will take place in the day sky or in the very early twilight sky, just above the horizon. At 7:18 pm CEST, the star 61 Tau (still in the day sky) will disappear on the unilluminated side of the Moon and reappear on the other side just under an hour later. Caution: at the time of the occultation, the Sun will still be in the sky. Do not stare at the Sun! Because it will still be daytime, the occultation cannot be seen from everywhere.
The next occultation, which can be observed from more southern regions, will be better: at 8:47 pm CET, the Moon will cover the star 68 Tau, and at 9:30 pm CET it will reappear on the other side.

May 8: The Moon Meets Mars

On the evenings of May 7 and 8, the Moon and Mars will come together. The Moon’s crescent will only be 8.8% illuminated, giving it a delicate look against the colorful evening sky. On the 7th the Red Planet will shine just 5 degrees above the Moon, and on the evening of the 8th the Moon will have overtaken Mars, moving from Taurus to the Gemini constellation.

A “Blue Moon” has become defined as the point when we have a full Moon twice in one month.  However, the older definition of “Blue Moon” refers to the third full Moon out of four in one season and is called a Seasonal Blue Moon. Occurring about every 2.5 years, the name has nothing to do with the color of the Moon, which is the same for every full Moon.

May 20: The Moon Meets Jupiter

At 10:30 CEST, the Moon and Jupiter will cross the horizon and travel together through the second half of the night, until Sunrise. For most of the night, they will be the brightest objects in the sky. Venus only begins to shine in the East starting in the early morning.

A PDF of this infographic can be found HERE.