The new 3-month night sky calendar at a glance. The astronomical infographic ’Highlights of the Winter Sky 2018/2019’ shows you what will be happening in the night sky. Descriptions of the individual events are below: 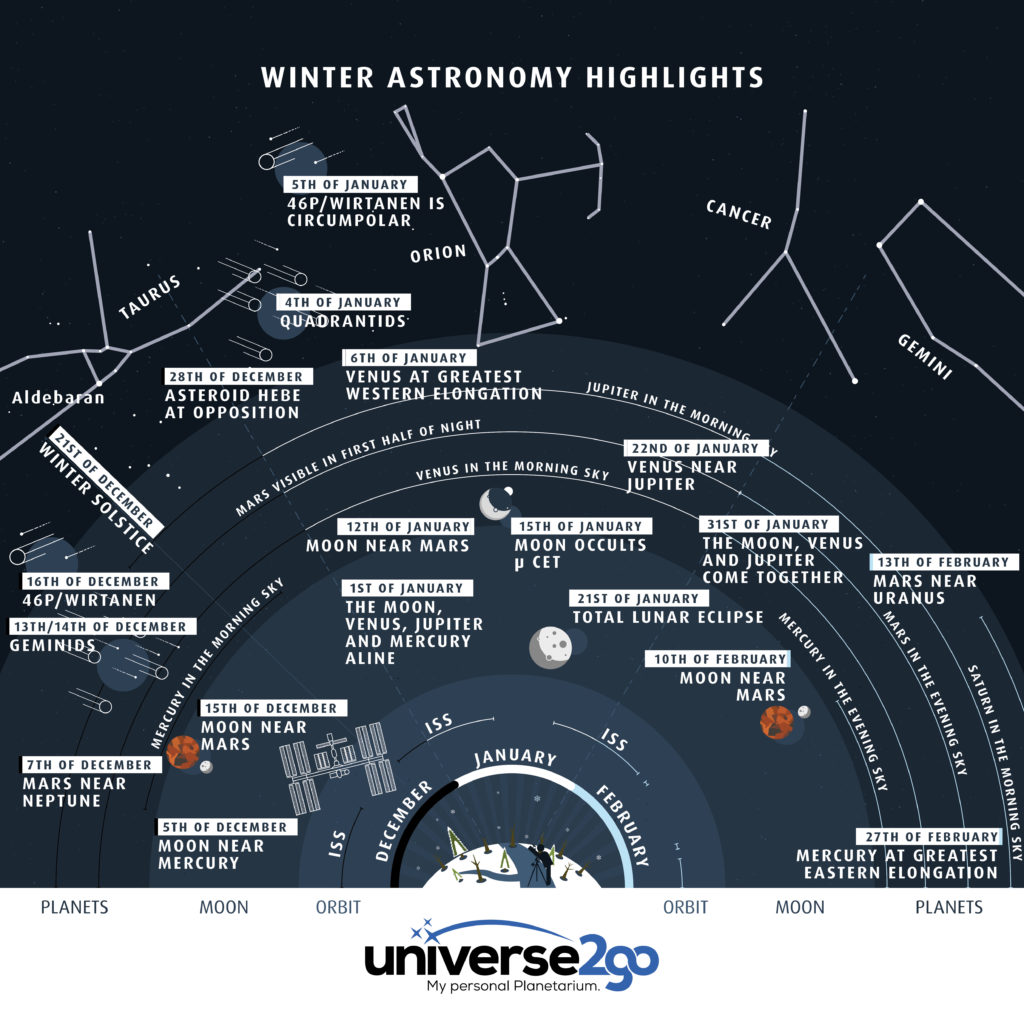 05.12. The Moon near Mercury
Early in the morning, the Moon can be observed near Mercury. They are separated by about only 7 degrees – making them suitable for observing with a pair of wide-angle binoculars.

07.12. Mars near Neptune
A fantastic spectacle – a very close encounter between Mars and Neptune. Only about 4 arcminutes away from Neptune, Mars passes north of Neptune from around 18:00. You will need a pair of binoculars or, even better, a telescope to observe them.

13./14.12. Geminids
If the night sky is clear in the evening, then it is best to observe facing south, as the ‘Geminids’ meteor shower will seem to come from the constellation of the ‘twins’ – more precisely, from a point two degrees above the star Pollux. Between 21:00 and 6:00 is the best time to observe. With around 120 meteors per hour, the Geminids is one of the most intense showers. However, the full Moon will diminish the view this year. Even so, you really shouldn’t miss this event.

15.12. Moon near Mars
The 42% illuminated and waxing moon can be observed near Mars today, separated by a distance of about 5 degrees.

16.12. Comet 46P/Wirtanen
The December Comet – finally, we have a bright comet again, which can be observed with binoculars and small telescopes. Comet 46P/Wirtanen reaches its closest proximity to the Earth on the 16th and can be observed near the Pleiades (M45) open star cluster at only 3 degrees away. A beautiful ‘constellation‘ through binoculars. Wirtanen is a rare comet, which could attain a strong brightness and hence become an impressive object for beginners. If everything progresses well, it could reach a brightness of up to magnitude 4 by the end of the year and so even become visible to the naked eye. Without the disturbing presence of the Moon, the comet can be found easily in the evening sky after Christmas.

28.12. Hebe in opposition
The asteroid 6 HEBE comes into opposition on December 28, attaining a brightness of about magnitude 8.5. It can best be seen around midnight in the constellation of Monoceros or in the constellation of Orion. You will need a mid-size telescope to observe it. Its current position can be found at any time, by using the Stellarium planetarium program for example.

01.01. Planet chain Moon, Venus, Jupiter, Mercury
Just in time for New Year’s Eve, the New Year welcomes us with a pretty chain of planets. In the morning sky just before sunrise, you can see, from the top right to the bottom left to the horizon: the Moon, a bright Venus, Jupiter and even a shy Mercury close to the horizon. Tip: A great opportunity to take a beautiful photo.

04.01. Quardrantids
The next meteor shower is here – the Quadrantids. This shower comes from the constellation of Bootes, with the number of meteors observed across the sky potentially reaching a maximum of 120 per hour. Observing in the early morning will give you the best chance of successful observing.

05.01. Comet Wirtanen circumpolar
The Christmas Comet will also delight us in the new year – while the comet was only seen in the evening or in the morning sky before, it has now become circumpolar, wandering through the constellation of the Ursus Major. You can now observe it over the entire night.

06.01. Venus at greatest western elongation
The best view of Venus is now here. The ‘morning star’ shines brightly (magnitude -4.5). At 47 degrees angular separation, it is at greatest western elongation and can be seen half illuminated. The planet will first peep over the horizon at about 4:30 CET, and can be observed for about three hours before disappearing in the sunlight.

12.01. Moon near Mars
From dusk on, you can observe the Moon in the south with Mars above it. They are separated by about 7 degrees.

15.01. μ Cet occulted by the Moon (evening)
The Moon will occult the 4.1 mag star μ Cet in the very early evening. The Moon approaches the star with its dark side and finally occults it at 17:44 CET. An occultation from the Moon’s dark side is always fascinating to observe – it appears as though the star has suddenly been ‘switched off’. It will take almost an hour for the star to then reappear on the illuminated side of the Moon.

21.01. Total lunar eclipse
Everyone probably still remembers the Total Lunar Eclipse in 2018, when the Moon offered us a summer spectacle at a still-comfortable time of night. This time around the show is on the 21st of January, at a rather unfavourable time with temperatures that are too cold to be considered ‘T-shirt weather’.

22.01. Venus near Jupiter
Jupiter and Venus can be observed together before sunrise. We can observe both planets shining in the southeast at a separation of only about 2 degrees. Venus is at magnitude -4.3, with Jupiter significantly weaker at magnitude -1.9. They provide a beautiful sight through binoculars, where you can admire them both in the same field of view.

31.01. Moon near Jupiter and Venus
On January 22nd the Moon joins the two planets, inserting itself in the middle between Venus and Jupiter.

02.02. Moon near Saturn (occulting in Germany and Austria)
The Moon is a waning ‘sickle’ and only 6% illuminated, so it is not visible until early in the morning. At 6.30 CET both astronomical bodies can be seen close to the horizon. The Moon can be seen to actually occult Saturn in both Germany and Austria – the ringed planet disappears behind the illuminated crescent moon at 6:37 CET, reappearing an hour later at the dark, north-eastern edge.

10.02. Moon near Mars
You can observe the crescent Moon and Mars together this evening in the same field of view in binoculars having a field of view of at least 7 degrees.

13.02. Mars near Uranus
Tonight, Mars will be less than 1.5 degrees away from the distant gas giant Uranus. The difference in brightness is significant – the red planet shines brightly at magnitude 1, whereas Uranus is only at a dim magnitude 5.8. Both objects can be observed using binoculars or a telescope. But it is definitely worthwhile – you can even see them together in the same field of view in a low magnification, wide-angle eyepiece.

27.02. Mercury at greatest eastern elongation (and half-full)
Because Mercury orbits so fast and so close to the Sun we cannot always observe it. But now Mercury is once again at a greater angular distance – of 18°- from the Sun. It’s not a huge separation, but it allows us to observe it for sufficient time during its half-full phase. Mercury can now be seen in the evening sky shortly after sunset. Be sure to wait until the sun has completely set before observing through any optics. You will then find Mercury just above the western horizon.