Autumn brings cooler weather after the baking summer and we can look forward to long, starry nights once more. The night sky has some highlights for us, which we should definitely observe, even in the months of September, October and November.

Our new astronomical infographic ‘Astronomy highlights in autumn 2018’ provides a quick graphical overview – which will keep you up-to-date and in the know about what’s happening in the night sky.

The following text provides details about the various astronomical events we can look forward to. 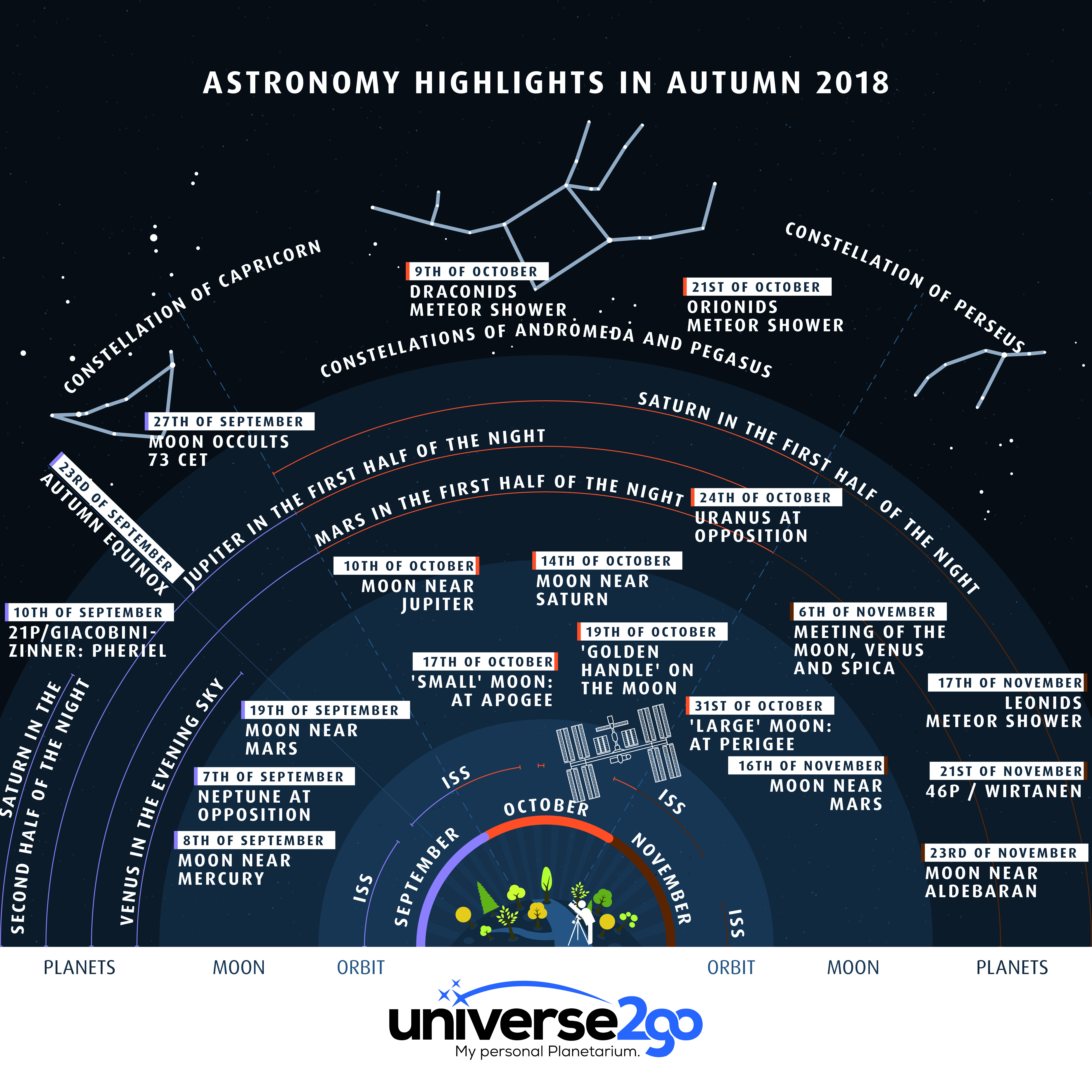 The Aurigids is a fast meteor shower, with speeds of around 65 km/s. It originates from comet C/1911 Kiess. Around six meteors per hour are visible at shower’s maximum on September 1. The radiant, the region of sky where the meteors appear to come from, lies in the constellation of Auriga below the star Capella.

The distant planet Neptune is once again at opposition to the Sun on the September 7. Make use of this opportunity to observe it. Neptune is a gas giant and is the outermost planet in the solar system. The light from Neptune, which is 4.5 billion kilometres away from the Earth, needs 4 hours and 10 minutes to reach us. You can find Neptune using binoculars – about halfway between the stars φ (phi) Aqr and λ (lambda) Aqr in the constellation of Aquarius. It appears as a greenish disc when observed in a telescope at 200-250 magnification.

In the morning we experience a golden rising of Moon and Mercury. Just one day before the new Moon, the crescent moon is looking rather insubstantial. Below this we find Regulus and Mercury just above the horizon – about a hand width apart.

Comet 21P/Giacorbini-Zinner is at its closest approach to the Sun and also at its greatest brightness. With a predicted magnitude of 6.5, it has become an object for observing in any binoculars. Just one day after the new Moon is a great opportunity to observe this comet.

At the beginning of the month, it moved from the direction of Capella through the constellation of Auriga and on the 10th of September it was halfway between the Auriga stars Alnath and θ (Theta) Aur.

Already by dusk we can observe Saturn above the ‘teapot’ of Sagittarius. The planet has become a familiar object, staying in the night sky throughout the summer. This evening it is joined by the Moon.

The Moon and the planet Mars are near one another this evening between Capricorn and Sagittarius.

Some people might think that the bright light on the horizon is an aircraft’s lights whereas, in fact, it is Venus. It is now a bright -4.9 mag object in the night sky. But the pleasure is short-lived – shortly after 8 pm it will disappear once again below the horizon.

A star occultation can make an attractive visual observation – especially when a star visible in the telescope suddenly disappears as if by magic. The Moon will occult the star Y Cap with its dark edge at 9:40 pm on the 21st.

Star ξ (Xi) cet in Cetus will be occulted tonight by the bright edge of the Moon. The star will disappear behind the Moon at 22:15 and reappear from its dark edge at 11:17 pm.

The Draconids is a meteor shower that seems to originate from the constellation of Draco. The maximum is expected on the 9th. Unfortunately, there is no prediction of the number of meteors we can expect. This can be very variable from year-to-year.

Just above the western horizon we can see a fragile crescent moon which is only 3% illuminated. On its left, we can see Jupiter. The planet will soon end its period of visibility and disappear from the night sky.

The constellation of Sagittarius in October is already nearing the horizon, meaning summer is long gone and autumn has long since arrived. But at dusk we can catch a last taste of summer – Saturn and the Moon meet and go down together in the southwest in the evening sky.

A close meeting of the Moon and Mars takes place in the evening on 18.10. They are only about 3 degrees away from one another and pass the meridian at about 20:40.

The Moon orbits the Earth in an ellipse – so it is sometimes closer and sometimes further away. Today, the Moon will reach apogee – that is, its distance 401,000 kilometres from Earth. This makes it appear smaller than when it is nearer the earth.

The Orionids is a smaller meteor shower with around 20 meteors per hour. The radiant is located in the constellation of Orion near the star Betelgeuse. Although you can watch the meteors throughout the month, the maximum is between October 20 and 21. An advantage this year is that this will fall just after the new Moon, so we can enjoy a particularly dark night. The best observing time will be between 10pm and 5am.

Uranus is one of the remotest gas giants, only appearing as a tiny featureless greenish disc in a telescope. But it can still be identified as a planet. Locate Uranus by using a star map or, even easier, by using the Go-To system on your telescope. Then you can observe the planetary disc at around 150-200X magnification.

Although the bluish planet shines at a brightness of mag 5.6, it will be difficult to locate due to the phase of the Moon. It is worth waiting a few days and observing Neptune without the Moon making things difficult.

If the Moon only had a very small apparent diameter in the sky on the 17th of October, it will now be the other way round this evening. Its elliptical orbit has now brought it to its nearest approach to the Earth. At only 367,000 kilometres away, it is now about 34,000 kilometres closer to us and has a much larger diameter of 32″.

If it is a clear night it is really worth getting up a bit earlier to enjoy a golden morning with an attractive coming together of the Moon, Venus and Spica. The Moon shows as a very thin crescent, only 2.4% illuminated. The next day brings a new Moon and the entire night is then perfect for deep sky observing.

Because it gets dark so early at this time of the year, we can still catch a glimpse of Saturn and the Moon. They are close together at a distance of just one lunar diameter.

The small separation, about half a hand’s width, of the Moon and Mars can be admired on the evening of 16 November. Mars reaches the meridian at 18:45 CET before the Moon reaches it a little later.

Juno is a large asteroid in the asteroid belt with a diameter of 257 kilometers. It is now back at opposition to the Sun and appears as a quite bright 7.6 magnitude object. This makes it great even for observers who otherwise do not usually bother observing minor planets. Despite its brightness, Juno only shows as a point, making it indistinguishable from a star. A star map and coordinates for locating it are therefore useful – for example from recent magazines or from the Minor Planet Center.

The Leonids reach their maximum on the 17th of November. They are the most familiar known meteor shower after the Perseids. There have been years when their meteors fell in great numbers. This usually happens every 33 years when the earth collides with the Leonid cloud.

In normal years, the maximum currently reaches no more than 20 meteors per hour. The rate will be slightly lower this year, at about 15 meteors per hour. The bright Moon in the sky will detract from the shower this year. But if you’re looking for a good place to watch after midnight, then the Moon is only 12 degrees above the horizon and will no longer influence observing.

The short-period comet 46P/Wirtanen – with an orbital period of only 5.4 years – is currently the most promising candidate for naked eye observing. This comet, discovered in 1948, is currently moving towards the Sun, and will reach perihelion on December 12th, 2018. It will reach its very near minimum distance to the Earth – only 11.6 million kilometres – just a few days later.

We will get a foretaste of this comet already by November – it could achieve a brightness of magnitude 6 to 7 and so be easy to observe using binoculars. It describes a relatively small arc the night sky, staying very close to the horizon. We can find it to the right of the ‘river’ of Eridanus and below Cetus from about 20:00 CET.

The full Moon can be observed near Aldebaran, the main star of the constellation Taurus, on the evening of the 23rd. It is a red giant, a 150 times brighter than the Sun. The name Aldebaran comes from the Arabic and means ‘leading star’ because it appears to precede the Pleiades.

Venus reaches its maximum brightness at magnitude -4.7. The brightness depends on the combination of its distance from the Earth and its current phase, and is now reaching its most favourable position. Venus can currently be admired as the ‘morning star’ and rises above the horizon after 4 AM. It reaches about 20 degrees above the horizon by 6:30 CET.

Enjoy your observing! We wish you clear skies!