Summer and warm temperatures: Those who aren’t keen on winter are now getting out and about again to look up at the stars. But, unfortunately, it also gets dark later – and just a few hours pass, in the blink of an eye, and it gets light again. So, you should make the most of the dark hours. For, when the summer Milky Way draws across the sky, there is a great deal of things to discover.

The astronomical infographic, “Highlights in the Summer sky”, shows you at a glance what is going on in the sky between the months of June and August. Including: A short description of the events. 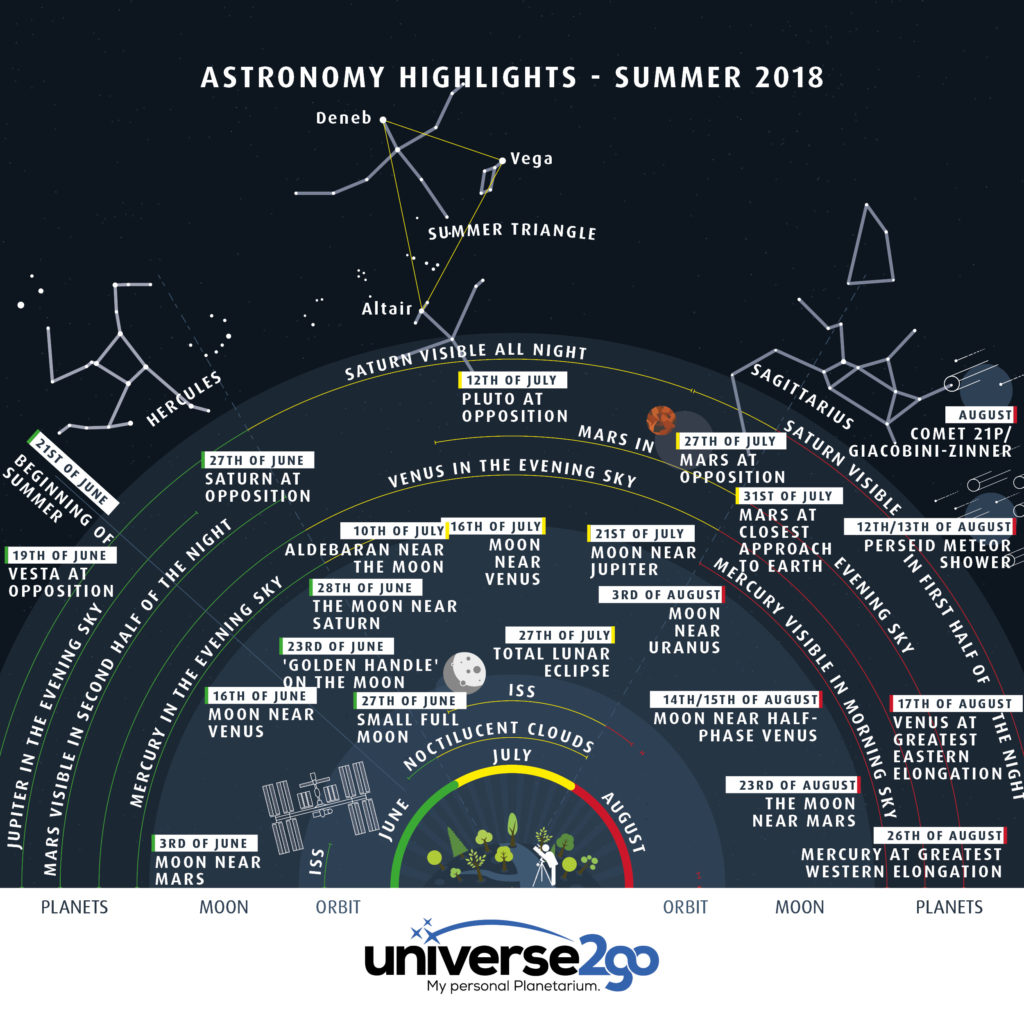 June
3 June, The Moon meets Mars
The Moon is already getting ready to put on a big show next month: an opposition at an extremely short distance. But we can already see Mars well. During the second half of the night, the Moon and Mars rise up over the south-eastern horizon.

16 June, The Moon meets Venus
A pretty pair in the evening twilight: the Moon and Venus. They can be seen close to each other at around 10 PM, above the western horizon. The waxing crescent Moon is only 5.8% illuminated and sweeps delicately in front of a yellowish-blue twilight sky.

19 June, Vesta in opposition
Vesta is one of the largest asteroids in the solar system and will enter its opposition on 19 June. Vesta has a brightness level of up to 5.3 mag. and can be viewed with the naked eye in a very dark sky. This opposition is particularly good, because Vesta is only rarely as bright as this. Where can this minor planet be seen? At the moment, it’s in Sagittarius, about 5° away from the star, μ Sgr (the star above the teapot in Sagittarius). During the month, it will start heading towards Ophiuchus.

23 June, Moon: Golden handle
The golden handle on the Moon can now be seen. Like a handle made out of light, it breaks the lunar night just on the other side of the Terminator. While the Sinus Iridum crater is still hidden in darkness, the Sun illuminates the ringed summit of the Montes Jura. It is visible between 4:30 and 8 PM GMT.

27 June, Small full Moon
The Moon goes around the Earth in an ellipse, not a perfect circle. This means: In the course of a month, it reaches a particularly close and a particular far position. At a distance of 403,000 kilometres, the Moon now appears smaller than usual, and has a visible diameter of 29° in the sky.

27 June, Saturn in opposition
The gas giant, Saturn, is now in opposition to the Sun again. In astronomy, this is cause for joy, because Saturn is now exactly opposite the Sun. Saturn, Earth and the Sun are geometrically in a straight line. For us observers, this means: The ringed planet can be seen all night. When night falls, it rises in the east and goes back down at daybreak.

28 June, The Moon meets Saturn
The Moon likes to occasionally pay a visit to our planets. On 28 June, it will be visiting Saturn again. Such encounters always make an enticing spectacle. And a beautiful occasion for an atmospheric photo with a camera and lens on a tripod. Saturn is currently at the top of Sagittarius and can be observed all night. On this night, the Moon will be approaching the ringed plant at about 1.9° and will go past it again the following day. One night later, they will have moved back to 9° from each other again.

10 July, The Moon meets Alpha Tauri
In the early hours of the morning, around 4 AM, the narrow waning crescent Moon and Alpha Tauri meet. To the north of London, the Moon covers the 3.6-mag bright star, Hyadum I.

12 July, Pluto in opposition
Pluto is a dwarf planet that is difficult to see and is barely distinguishable from a star. At least, if you don’t have a precise map at hand. Despite that, it’s worth taking a look with a larger telescope at this outpost of the solar system. Coordinates for the GoTo control: Rect: 19h25m20s, Dec: -21°49′

16 July, The Moon meets Venus
A brightly glowing Venus and a waning crescent Moon: At the moment, at dusk, you can observe this pretty sight.

21 July, The Moon meets Jupiter
When Venus goes down in the West, Jupiter dominates as the brightest planet in the night sky. At the moment, the Moon, illuminated at 70%, is keeping it company.

27 July, Mars in opposition
This is a superlative event: Since 2003, we have been looking forward to the most exciting Mars opposition. At only 57 million kilometres away, Mars rarely comes this close to Earth. Now, there’s an opportunity for successful observation with Mars at full size and with quite a few details. And this is all thanks to an imposing diameter of 24 arc seconds. Not until 2035, will the red planet offer us such a highlight again.

27 July, Total lunar eclipse
On the same day as the Mars opposition, a total lunar eclipse will take place. Another special event. Because: Recently, lunar eclipses have been very rare. At dusk, look for a place with a very good view of the horizon, because we won’t get the start of the lunar eclipse. As soon as you see the Moon over the horizon, the partial phase will already be well advanced, and just after at 9:30 PM CET, the total eclipse will start. The middle of the eclipse will be reached at 10:22 PM CET, and the end will be reached at 11:14 PM CET. Then, on the left edge of the Moon, we’ll see a crescent made of light coming up. Tip: We can also see Mars below the Moon.

31 July, Mars comes closest to Earth
The opposition of Mars is only a few days ago, but today Mars is coming particularly close to Earth. At a distance of only 57.6 million kilometres. That is almost as close as in 2003, when Mars moved to just 55 million kilometres away. From an astronomical point of view, there’s no difference.

Noctilucent clouds
You can’t see them now: noctilucent clouds or night clouds. If, in the summer, the Sun is between 6° and 16° below the horizon, it sometimes lights up extremely thin single-crystal clouds about 80 kilometres high. In fact, these clouds are so high that they are in the mesosphere of our atmosphere. For us, it’s been night for a long time, but these clouds catch a little Sunlight and we see bluish-white clouds lighting up that are invisible during the day.

3 August, The Moon meets Uranus
Uranus is a gas giant, and yet it appears tiny in a telescope. That’s hardly surprising, since it is one of the two most distant planets in our solar system. You can’t see any details in a telescope. It is, however, fascinating to see the planetary disk – at a magnification of between 150 and 200. On 3 August, the Moon will be passing quite near to Uranus.

August: Comet 21P/Giacobini-Zinner
This comet was observed the first time in 1900 by Giacobini, and then rediscovered by Zinner in 2013. Using the data, we determined that this comet had an orbit lasting 6.5 years, meaning it’s a comet with a short orbit. In 2018, it will be clearly visible in the northern night sky, as early as June and July. In August, however, 21P/Giacobini-Zinner will be found just before its closest point to the Sun, and will achieve an interesting level of brightness, estimated 7.8 mag. In August, it will wander northwards past Cassiopeia, through the giraffe in the direction of Auriga.

12/13 August, Perseids
Every year, we look forward to the most beautiful shooting stars of the year: the Perseids. During the morning of 12 August, the meteor shower reaches its pinnacle. There are up to 100 shooting starts per hour, that fly through out atmosphere at an unbelievable speed of approx. 216,000 km/hr. The peak is reached between 10 PM CET and 4 AM CET
Last year, the Moon once again spoiled the meteor shower, but this year it’s going to be totally different. One day after the new Moon, nothing will ruin your observation session. You can look forward to fantastic conditions. We can thank the comet, 109P/Swift-Tuttle, for this meteor shower which lost part of its mass on its path around the Sun. Whenever Earth crosses the path of the original comet in August, the Perseids shoot through our sky.

14/15 August, The Moon meets half Venus
During dusk, we will experience one of the most beautiful conjunctions of Venus and the Moon. The new crescent Moon will be bright over the western horizon, and about 4° below will be Venus. On 15 August, our neighbouring planet will reach its half phase: dichotomy. The disk will appear at a size of 24″.

17 August, Venus’ largest easterly elongation
At an angle of 46° to the Sun, Venus will normally reach good visibility in the evening sky. As it’s low down in the sky at the moment, however, and its path is leading southwards, it sets just after the Sun. It wanders far below the equator from Virgo into the constellation of Libra.

23 August, The Moon meets Mars
During this night, the Moon is at a distance of only 6° from the red planet.

26 August, Mercury’s largest westerly elongation
Mercury will reach its largest westerly distance from the Sun today. It is, however, in its orbit close to the Sun. This is why its morning visibility is quite poor. From about 5 AM CET, you can spot it on the eastern horizon.