The winter is getting really cold again, but there is no better time than this for really good, early evening, chances to observe the stars. And what will lure you outside better than the Hunter of the Skies, the Seven Sisters or the Eye of the Bull?

The sky calendar with the interesting events for the next three months: the astronomical infographic “Winter Astronomy Highlights 2019/20” shows you when a glance at the sky will be worthwhile.

We wish you lots of fun with your observing! 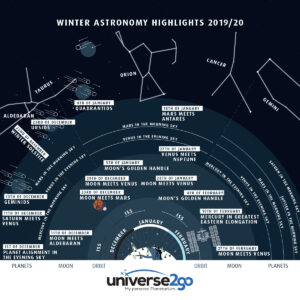 At dusk there is a lovely meeting of the planets Jupiter, Venus and Saturn. They are accompanied by the waxing Moon.

The planets Venus and Saturn meet today at dusk, above the northwest horizon. Look out for the difference in brightness between the two as they race past one another, less than 2 degrees apart.

Already in the early evening we can see Aldebaran, the Eye of the Bull, as it appears above the horizon. However today it reveals itself with the almost fully-illuminated Moon. A great evening for observing planets and double stars.

13th of December: The Geminids

If the sky is clear in the evening, it’s best to take a look to the south. Because the Geminids shooting stars appear to originate from the constellation Gemini. To be more precise: from a point two degrees above the star Pollux. The best time for observing is between 21:00 CET and 6:00 CET. At 120 meteors per hour, the Geminids are among the most reliable shooting stars. However this year the full Moon will disrupt the view. Nevertheless, you should not miss this event.

Early risers take note: one day before Christmas it’s worth getting up early and taking a look at the sky. At dawn a delicate crescent Moon shines, just 10% illuminated, and meets up with Mars, the god of war.

23rd of December: The Ursids

The Ursids are a meteor shower that you can keep your eye on all night. This is because they originate from Ursa Minor, from which these meteors get their name. However these beacons speed across the sky more slowly than the Perseids – at around 35 kilometers per second.

As soon as it gets dark we can see them shining above the horizon: the Moon and Venus. Even if this is not the most astronomically interesting event, under a clear twilight sky this sight is probably one of the most beautiful. This evening the Moon can be seen as a wafer-thin crescent and Venus shines in all its splendour.

4th of January: The Quadrantids

The Quadrantids are a meteor shower originating from the constellation Böotes. The New Year almost begins with an astronomical fireworks display, which brings us about 120 meteors per hour. In the evening the half-lit Moon is still high in the sky: wait until it disappears under the horizon before you start observing – then it will be dark. Böotes is one of the spring and summer constellations and so now, in winter, it – and therefore also the radiant – does not rise until after midnight. Then observing can become very interesting. Oh and yes, wrap up warmly, because patience is required when observing meteors.

A fascinating event: the Moon’s Golden Handle. Like a handle of light, it breaks the Moon’s darkness just beyond the terminator. We look at Mare Imbrium in the region of Sinus Iridum crater and the high Montes Jura mountain range. The Sun rises here at the boundary between light and shadow. While the crater is still in darkness, the Sun bathes the circular-shaped peaks of Montes Jura in light. A golden ring in the dark.

Antares is a red supergiant in the constellation Scorpius. It shines with an intense red light and resides at the very bottom of the class M spectral type. If it stood in the place of the Sun, Antares would reach beyond the orbit of Mars. But today Mars and Antares meet only visually for us in the sky. Compare the red colours of these two celestial bodies.

One very close, the other very distant: our neighbouring planet Venus meets up with the outpost of our solar system. With just the naked eye, however, we can admire only Venus. But less than a degree north we meet Neptune, which reveals itself in a telescope as a small blue disc.

Another chance to see this beautiful sight: Venus and the narrow, 12% illuminated, crescent Moon. Until around 20:00 CET we can easily follow the two brightest bodies in the sky, before Venus disappears below the horizon, often in haze, a good 40 minutes later.

As on the 5th of January, today we can once again observe the Moon’s Golden Handle. This is caused by the illuminated peaks of Montes Jura mountain range on the dark side of the terminator.

Mercury is nimble and only rarely visible. But right now our shy friend reveals himself in the evening sky. It is positioned at its greatest angular distance from the Sun and is barely visible in the growing twilight. For this you need a very good view of the horizon, cloud-free and clear weather, and binoculars with which you can discover Mercury.

The second beautiful sighting of the crescent Moon and Venus at dusk. Meanwhile we can follow the splendour of the bright and shining Venus in the sky for some time – as it only disappears under the horizon at around 22:00 CET.