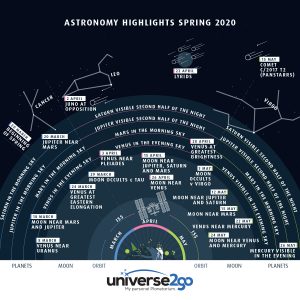 Once again there is plenty going on in the sky this spring. There the gas giants shake hands, a planet meets a star cluster, star occultations take place, and you may even spot a comet with binoculars.

We hope you enjoy the latest astronomical infographic, “Astronomy Highlights Spring 2020”. You will find explanatory descriptions of the events in the following text.

Bright Venus, faint Uranus: these two planets meet one another today at dusk, as Venus hurries past the gas giant at a separation of around 2°. You can identify them easily using binoculars.

18 March: The Moon near Mars and Jupiter

If you get up early this morning you will be rewarded with a very special sight. Above the south-eastern horizon the waning Moon can be identified in an attractive grouping along with Jupiter and Mars. A little further east Saturn joins in too.

Once again Mars pays a visit to the big planets. This morning it meets Jupiter, approaching it at a separation of 40 arcseconds. In the coming days it passes by Jupiter and heads towards Saturn.

Half-illuminated, now Venus presents itself as an interesting object to observe. It gleams with a brightness of magnitude -4.3 and appears as a lovely evening star for almost the entire first half of the night, before finally disappearing below the horizon shortly before 23:00 CET.

Slowly winter bids farewell to the night sky. But the constellations Orion and Taurus are still visible in the western sky. This evening you can be witness to an interesting occultation of a star by the Moon. At around 21:30 CET the Moon draws near to the magnitude 3.5 star Epsilon Tauri in the Hyades cluster and at 21:35 CET occults it from its dark side.

Juno is a large asteroid in the main asteroid belt, with a diameter of 257 kilometres. On 2 April it reaches opposition to the Sun and shines with a brightness of magnitude 9.5.

3 April: Venus near the Pleiades

An unusual encounter: on 3 April we can see how Venus meets the Pleiades in the night sky. It’s a really rare sight, and all the more beautiful if we observe these objects through a telescope or capture the memory in a photograph.

15 April: The Moon near Jupiter, Saturn and Mars

At the moment the trio made up of Jupiter, Saturn and Mars is visible every morning before sunrise in the southeastern sky. Even if you don’t normally get up this early, try it once. For example this morning. Because today the Moon joins in and (together with the planets) offers a fascinating sight.

26 April: The Moon near Venus

The Moon is just three days old and yet lights up the evening sky as a slender, fine crescent. Today it meets Venus, the bright evening star.

A fiery brilliance in the sky. When we take a look at the sky we can see the glistening bright Venus. Many people mistake it for an aircraft with its lights, or even a UFO. But you know it’s Venus which is reflecting more than 75% of the sunlight and so shines so brightly in the sky.

3 May: The Moon occults Nu Virginis

The Moon approaches from its dark side and heads towards the star Nu in the constellation Virgo. At 23:48 CET the star disappears behind the Moon and reappears a good 40 minutes later behind the bright side. Before observing check your local occultation times since this can vary slightly according to location.

12 May: The Moon near Jupiter and Saturn

In the last hours of the night, the solar system’s dream team appears over the horizon: bright Jupiter, an even brighter Moon and the somewhat weaker Saturn.

Shortly before dawn breaks, you can find the Red Planet and the Moon. They approach one another between the constellations Aquarius and Aries at a separation of 3°. Above and to the right at an angular distance of a good 30° you can see the two gas giants Jupiter and Saturn.

This comet could be a highlight in May. If the forecasts are correct, comet C/2017 T2 (PANSTARRS) could reach a brightness of magnitude 8 and so be easily visible with binoculars. In May it will linger in the circumpolar constellations. In the course of the month it will move from the constellation Camelopardalis (directly next to Ursa Minor), towards Ursa Major. On 23 May it stops close to the galaxies M81 and M82.

22 May: Venus near Mercury

Venus shines like a beacon in the sky. If you didn’t know you could easily mistake it for an aircraft’s lights. This evening Venus meets its direct neighbour, Mercury.

24 May: The Moon near Venus and Mercury

At the end of May everything revolves around Venus and Mercury since both planets are especially well visible at the moment. Today they share the limelight with the slender and only 4% illuminated crescent of the twodayold Moon.

26 May: Mercury visible in the evening

Mercury is so close to the Sun, nimble and very shy. At least this is the impression you can get when you try to observe it. It usually keeps itself close to the horizon. However now it is possible to discover it since it reaches an altitude of around 10° at dusk. It’s best to be on the lookout with binoculars a short time after sunset.