A visit to the Pleiades, a very bright minor planet and a superbly-visible Mercury in the evening sky. There’s lots to look forward to the astronomical spring, because it has plenty to offer.

In the infographic Astronomy Highlights in Spring 2021, you have an overview of the important celestial events for the next three months.

We wish you lots of observing pleasure! 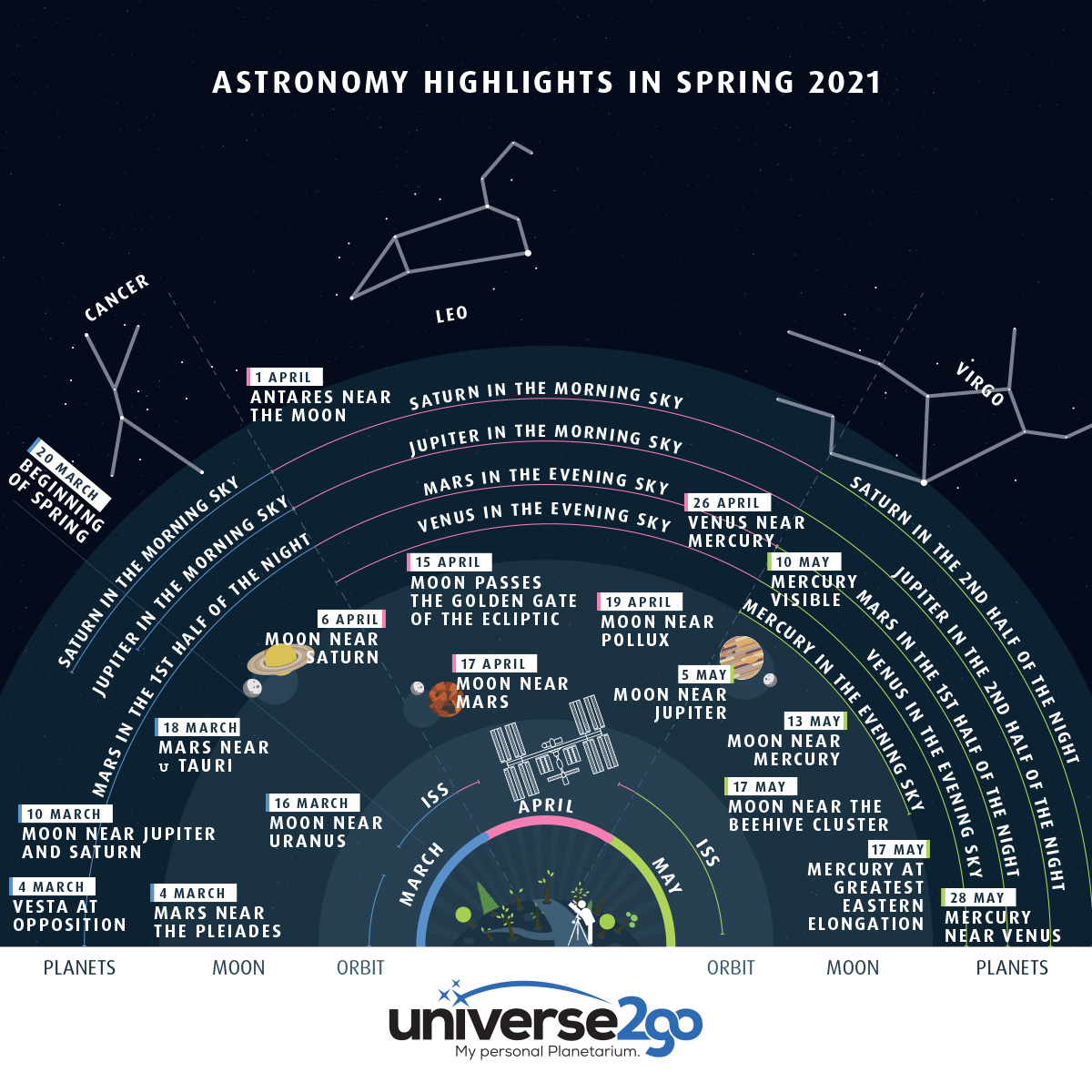 4/3 Mars near the Pleiades (Golden Gate of the Ecliptic)

Mars was in opposition last year and was visible in the starry evening sky. It still gleams in the night sky, disappearing ever more from the picture, along with the winter constellations. Around 4 March it nears the Pleiades at a distance of about 2 degrees. In doing so, the god of war also passes through the Golden Gate of the Ecliptic. This is the name of the area between the Hyades and the Pleiades, through which the ecliptic takes its course.

Vesta is a goddess in Roman mythology but also the name of a well-known minor planet. With a diameter of 520 kilometres, it is the second largest in the asteroid belt.  While at opposition, it can sometimes be distinguished with the naked eye. Currently, at mag. 5.8 – 6.0, it is just beyond the visibility of the naked eye. However, it is easy to see with binoculars or a telescope. So how about observing a minor planet? That would make a very special star-gazing evening. What’s more, you can easily find Vesta in the rear part of the constellation Leo. From star Theta Leonis (the hind leg of the lion), just one degree to the northeast – et voilà. 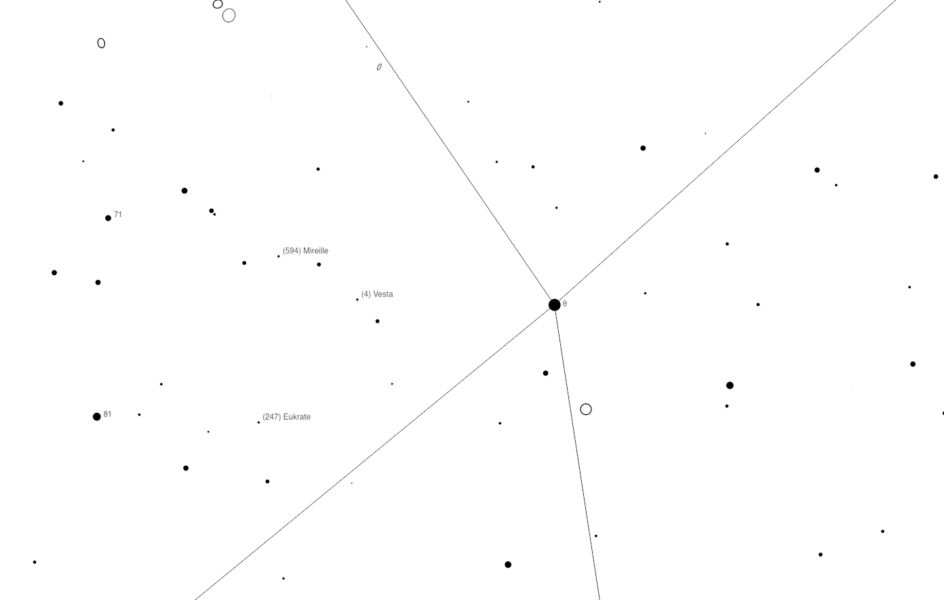 A difficult encounter: Mercury and Jupiter are near one another, but they are not easy to track. When both become visible, it will be shortly before 6:00am and the Sun will be just 8 degrees below the horizon. The time window is short and you need a clear view of the horizon as the two planets approach with a separation of just 0.3 degrees.

10/3 the Moon nears Jupiter and Saturn

Just before dawn for early risers: several objects gather together over the south-eastern horizon this morning. Almost as if they were on a diagonal pearl necklace, you will discover Mercury, Jupiter and Saturn. The delicate crescent Moon frames this meeting of the planets, and turns the morning into a wonderful astronomical event.

In the evening hours we see the waxing crescent Moon between the constellations Cetus and Pisces. If you like, you can make a detour from here with your telescope, to the distant planet Uranus. Because today it is just 6 degrees above the Earth’s satellite. Uranus is always worth a look, because it is not a standard object, such as Saturn or Jupiter. As a distant planet, even in a telescope it is just a small disc which, if you look closely, is clearly different from a star. Nevertheless, it makes sense to familiarise yourself with the exact position on a star chart before observing.

A few days ago, Mars moved through the Golden Gate of the Ecliptic, past the Pleiades. Today it stops at u Tauri in the constellation of Taurus, at a star that is a member of the Hyades. This is a pulsating star, which changes its luminosity within a few days. If you scan through this area with binoculars, you will notice a pattern made up of many stars. This is an asterism, a pattern-like group of stars. It’s called Davis’ Dog and depicts a dog with a nose, eyes, ears, legs and tail. Although some people see it as a fox. What do you see?

During the night from 1 – 2 April, the Moon approaches the brightest star in Scorpius: Antares. It is a red supergiant and shines brightly and red-hued in the night sky. Its diameter is 700 times greater than that of our Sun and it would swallow some planets, including our Earth, if it were to take the place of our own celestial body.

The morning sky already shows us the heralds of summer: the constellations Sagittarius and especially Capricornus. In the realm of this mountain goat, the Moon and Saturn meet today and stand at a separation of 5.3 degrees.

15/4 the Moon passes the Golden Gate of the Ecliptic

Three days after the new Moon, the delicate crescent Moon appears again in the evening above the western horizon. Our satellite reaches the Golden Gate of the Ecliptic, which is flanked by the famous star clusters of the Hyades and the Pleiades.

The Moon approaches the star Pollux in Gemini at a separation of 3.3 degrees. The more interesting thing tonight, however, is the occultation of star kappa Gem by the Moon. It approaches with its unlit side and swallows the bright mag. 3.5 star for a little more than an hour. The occultation can only be followed in certain regions with sufficient darkness. In Germany, the occultation begins at around 20:21.

This is something for specialists: because Venus and Mercury are not yet visible in the evening sky. But at dusk, the two inner planets approach one another and pass by at a distance of 1.3 degrees. At 20:45 CEST, the Sun will be just 4 degrees below the horizon and the planets will be slightly above it. So you may catch a glimpse with large binoculars, but it’ll be difficult to observe.

Capricornus belongs to the summer constellations and is already climbing above the horizon in the morning sky. The planet Saturn will remain in this constellation for the next two years, before it moves to Aquarius. However, this morning the Lord of the Rings gets a visit from the Moon.

Yesterday, the Moon visited Saturn, today it also calls on Jupiter. It is still in the neighbourhood, after Jupiter and Saturn met in a very close conjunction last December.

Mercury has good evening visibility this month – it’s the only month this year when it is really easy to observe. From 10 May, it’s easy to find on the western horizon. At around 21:30 it will be dark enough that you will have no problem seeing it gleaming in the sky. Venus is on the verge of setting, but Mercury is around 8.5 degrees above the horizon. This means: if you have a good view towards the horizon, you have an hour until it disappears in the haze of the horizon and sets. Over the course of the month the little planet climbs the stairway to the heavens, and will be located a little higher every day. On 18 May, it will not set until 22:53 CEST – but thereafter it sets a little earlier every day.

One of the most beautiful encounters on the evening sky: shortly after sunset today, the 3.5% illuminated crescent Moon joins Mercury and will be just 2 degrees to the south. Further below you will discover Venus.

In the far west, today the still-narrow crescent Moon meets with Mars in the constellation Gemini. By the way, NASA launched a new robot mission to Mars last year. NASA successfully landed the Perseverance rover on Mars in February, as part of the Mars 2020 mission. The first ever Mars helicopter is on board. Controlled by rotor blades, the drone will fly through the thin “air” and help to explore Mars from a low altitude.

Mercury is at its largest eastern elongation today. With this, it reaches its greatest angular distance from the Sun and holds an easy-to-observe position above the horizon. We now have more than an hour to marvel at it before it sets. If you want to observe it with a telescope, now is also the right time – as the planet sneaks away from the thicker layers of air in the atmosphere.

17/5 the Moon nears the Beehive

It is often simply called M44 or Praesepe, but a particularly nice name for this object is: the Beehive cluster. Like in a luminous beehive, there are about 300 stars bustling in this open star cluster. The Moon nears the Beehive at about 4 degrees. This means you can see both objects with a pair of binoculars in the same field of view.

Tonight, the waxing Moon nears Regulus, the main star in constellation Leo, which is also called Little King in German. Its position is close to the ecliptic, which means that repeated occultations of Regulus by the Moon can occur.

Mercury had its best evening visibility this month and was positioned high above the horizon. Meanwhile, it has lost some height and is joining up with lower-positioned Venus. They pass by one another, but meet on the 28th and approach each other at a separation of up to 0.5 degrees.

In the second half of the night, you can observe the Moon and Saturn in a southerly direction in constellation Capricorn. The constellation climbs higher and higher until daybreak, and approaches the meridian, the highest point in the sky.