The Transit of Mercury in the Eyes of the Blind

Yesterday, many had the fantastic opportunity to follow an event of astronomical proportions – the transit of Mercury!  For the first time in 13 years, Mercury passed in front of the sun just for our viewing pleasure.  Much unlike observing a solar eclipse, witnessing the transit of Mercury is not so easy.  With a telescope or at an observatory with all the right equipment, such an event would be quite an experience.  Actually ‘seeing’ the transit can be difficult for some.  The blind, obviously, encounter many hurdles when trying to understand the Universe around us.  That doesn’t mean that the blind can’t experience the Universe in any way.

Gerhard Jaworek, who himself is blind, is proof that such a hurdle can’t stop his passion for astronomy.  He works as the chair for IT Systems for Visually Impaired at the Studienzentrum für Sehgeschädigte (SZS) or Center for Visually Impaired Studies at the Karlsruhe Institute of Technology.  At the center, he supports students with limited sight to make their studies as accessible as possible.  His mission is to “include the heavens.”  For his work, he has been inducted as a member of the German Astronomical Society. 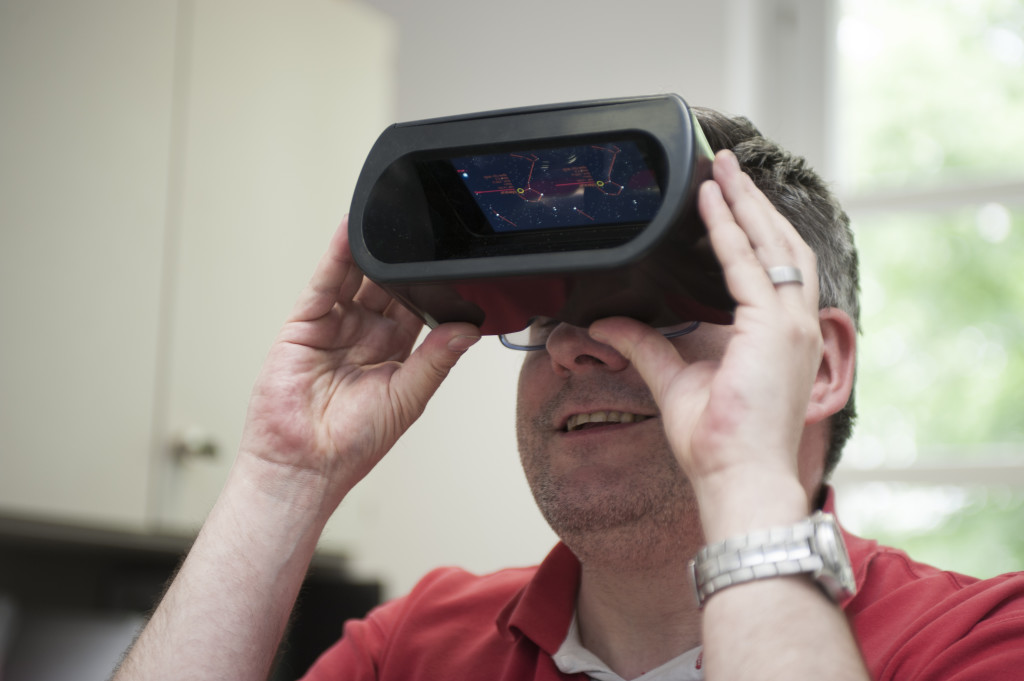 In the SZS, Gerhard Jaworek shows blind students, how those without sight can still study. © copyright by KIT

So, how was it for a blind person to follow the transit of Mercury?  Gerhard Jaworek elaborates in his report:

“It is now behind us, this huge astronomical event, which appears to be so small and invisible.

I even had the chance to follow the event with the Universe2go star viewer.  I used planet search mode to find the Sun.  I would have found it either way, but I wanted to get a full experience with Universe2go.  It worked great, since the Sun is so large and so close.  The next step was to turn towards the Sun, but using search mode to find Mercury.  When I found it, I could feel the Sun shining with its heat on my face.  Of course, I expected such a feeling.  However, to use a tool in order to gain a feeling and experience an event is something different than simply knowing.

I repeated my attempt again at the beginning of 2 PM, in the middle of the transit at 5:30 PM and at the end at around 8:15 PM.  My goals was to experience the transit of Mercury across the Sun’s disk.  I imagine that I was able to experience the difference from one side to the other of the disk, but I cannot be for sure.  The Earth had moved significantly in the mean time.  That was something I was able to experience, of course, in the direction and angle of the ecliptic throughout it all with Universe2go.

The movement of Mercury is not something that I would be able to scientifically verify, but I had the feeling and that was OK.

If you have an iPhone and are interested in astronomy, should definitely consider Universe2go.  In the mean time, I have been working with a developer, Martin Neumann, for about a year.  He implements all he does in an empathic and wonderful way, to brainstorm what we can do for the blind.  If someone would have asked me last year in February, when we met each other, if I could imagine that an app would be accessible to the blind, I would have denied it.  And now it works, as a matter of fact.”

On 1 October 2015, Gerhard Jaworeks book Blind zu den Sternen – mein Weg als Astronom (Blind to the Stars – My Way as an Astronomer) in the Aquensisverlag Baden-Baden publishing house.  In the book, he describes how he has faired with his blindness in the world of non-sight-impaired astronomers.