The highlights of the winter sky are the bright stars around the constellations Orion and Taurus. But the next three months also offer us more to discover: a bright evening star, meteor showers and a beautiful necklace made of planets.

In the “Astronomy Highlights in Winter 2021/22” infographic, you will find many important celestial events at a glance. Information and further explanations of the events can be found in the accompanying text.

We wish you lots of observing pleasure. 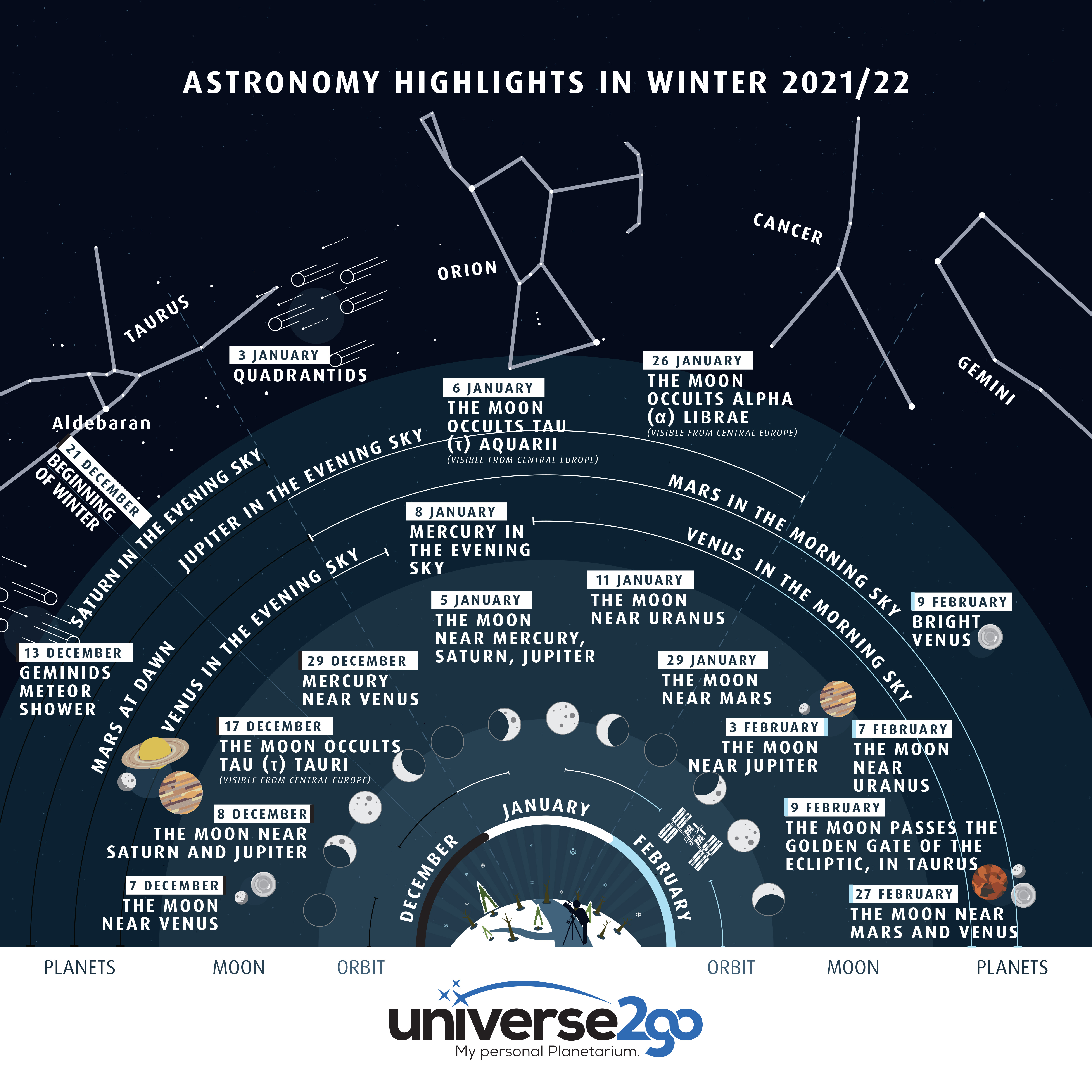 Venus is at its brightest at the beginning of this month. At mag -4.8, it stands out in the evening sky now and is, after the Moon, the brightest object in the sky.

7 December The Moon near Venus

In the early evening sky, the waxing crescent Moon joins an attractive planetary parade. Venus, Jupiter and Saturn are visible, looking almost like a pearl necklace.

8 December The Moon near Saturn and Jupiter

Those who sighted the Moon yesterday will discover it higher and about 14 degrees distant today, between Saturn and Jupiter.

If the sky is clear in the evening, you should take a look towards the south. There you will find the Geminids meteor shower, appearing to emerge from the constellation Gemini. More precisely: from a point two degrees above the star Pollux. The best time for observing it is between 21:00 and 06:00. With 120 meteors per hour, the Geminids are among the most prolific meteor showers. This year we have to wait until the morning hours to observe undisturbed and with no Moon.

Tau Tauri is a star in the constellation Taurus and, at magnitude 4.3, it is visible with the naked eye. Since the Moon’s orbit appears to run through Taurus, occultations often occur. This is the case today: at 22:30 Tau Tauri disappears behind the almost full Moon and appears around 80 minutes later on the other side.

Mercury begins to be visible in the evening and meets with neighbouring planet Venus at dusk. If you have a good view of the horizon, you will discover both planets from 17:00.

The Quadrantids are a meteor shower originating from the constellation Boötes. The new year brings us up to 100 meteors per hour, but they are only moderately bright. The radiant, from where the shooting stars seem to originate, does not appear until after midnight. The new Moon was just yesterday, making astronomical observations particularly worthwhile right now.  Green light for all deep sky observers!

Planet fans will be delighted: at dusk you can see a beautiful chain of planets consisting of Jupiter, Saturn and Mercury. The three-day-old crescent Moon accompanies the trio. A lovely way to welcome the new year.

It’s still twilight and we’re waiting for the night to come. But the first astronomical highlight is already taking place. At 17:00, the Moon occults the mag 4 bright star Tau Aquarii in the constellation Aquarius. In this occultation, the Moon approaches from its unlit side.

8 January Mercury in the evening sky

Over the last few days, Mercury has become increasingly visible in the evening sky. It’s not exactly bombastic, but for those who would like to see reclusive Mercury, now is a great opportunity. Today and for the next two days, the conditions are particularly good, because its brightness and altitude in the sky are aligned. Soon Mercury will sink back toward the horizon and disappear.

11 January The Moon near Uranus

The planet Uranus is a distant agent in the solar system. Today, it is just 2.5 degrees from the Moon. Try your luck with a pair of binoculars.

This is something for early risers only: an occultation by the Moon of a star in the constellation Libra. More specifically, the Moon occults the mag 2.7 bright double star Alpha Librae. It gets going at 6:40!

29 January The Moon near Mars

Those with a great craving for the planet Mars will be able to see it at dawn in the south-east on 29 January. On this day there is an attractive meet-up with the narrow crescent Moon. You won’t catch another glimpse of Mars in the night sky until the coming summer.

3 February The Moon near Jupiter

Jupiter accompanied us last year and was visible every evening in the sky. But soon it will escape our gaze and disappear from the sky for a while. On 3 February, it reveals itself once more in the twilight in a duo together with the delicate crescent Moon.

7 February The Moon near Uranus

Tonight, the Moon passes the planet Uranus at a distance of just 1.5 degrees.

9 February The Moon passes the Golden Gate of the Ecliptic

The area between the Hyades and the Pleiades has a name: the Golden Gate of the Ecliptic. Today, the Moon is a nocturnal wayfarer between the two well-known star clusters.

Venus lives up to its title of the Morning Star. Because with almost mag -5, it is radiantly bright. This astronomical spotlight appears above the horizon at around 05:00. It shines so brightly that no one can miss it.

27 February The Moon near Mars and Venus

Bright Venus, red Mars and a slender crescent Moon, just before the new Moon. What a great motivation to take a very early morning look at the sky. A peaceful morning mood is guaranteed.